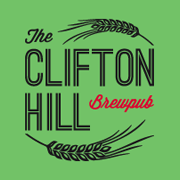 STATS
The Clifton Hill Brewpub is located in Clifton Hill, a small wedge of a suburb in Melbourne that many wouldn't know that sits on the juncture between Fitzroy, Collingwood, Abbotsford & Northcote. The building the Brewpub is now housed has quite a history; having served beer to the Clifton Hill community since 1884 as The Clifton Hill Hotel.

At the end of 2013, the same family that has owned the hotel for 30+ years decided to rip out the TAB & the band room and replace it with a brewery. The Clifton Hill Brewpub was installed and commissioned in 2014, which is far later than I had recalled - I must've first visited within weeks of it opening.

The venue appears to be a classic Melbourne pub from the outside, complete with drive thru bottle shop at the rear. The bottle shop is pretty well stocked, with a wide array of craft beer in addition to a good wine & spirit selection across multiple price points.

Inside the pub still has some features showing it's heritage, although most of it has been replaced by a more contemporary vibe. There's plenty of exposed brick, so very Melbourne, some predominantly white funky wallpaper, which really lightens up both the bar and the dining room at the rear of the building. The decor is quite modern in the dining room, whilst showing come character with bright yellow metal tables and stools in the front bar.

Throughout the venue there are a number of windows through to stainless steel, so that you still know you're in a brewery. Speaking of the stainless steel, they currently run a 600L custom designed system, which allows them to keep their taps stocked with their core range offerings as well as a number of limited releases. In the last year or so they've started to package a small number of their beers into 750ml bottles for takeaway consumption. 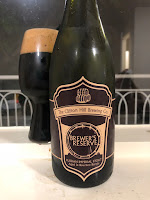 At the back of the building is a lovely little beer garden, which continues the more modern/contemporary vibe. It's a restoration that's been done really well, without taking away all the character of the old building. The food at Clifton Hill is well worth trying, they've got one of the more extensive brewery menu's I've seen!

One of those limited releases was their Russian Imperial Stout Aged in Bourbon Barrels. As an indicator of just how limited, I had bottle 125/408. It's also one of the better Imperial Stouts I've had this year. There was huge notes of chocolate, roast & bourbon barrel, as well as notes of caramel & dark fruits underneath. It's beautifully integrated for such a small release.

Remember it's always Beer O'Clock somewhere in the world!
Posted by Noz at 23:22