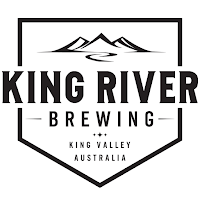 STATS
King River Brewing opened it's doors in the King Valley in late-2016. The business is a family affair, owned by husband & wife team, Nathan & Brianna Munt. It's located on Brianna's family farm, in one of the most picturesque areas of Victoria. The King Valley has a multicultural history and also has produced a wide variety of agricultural products, including hops!

The family farm had lived a previous life as a tobacco farm, a legacy of the Chinese who moved to the area from the Goldfield in the 1880's. Italian immigrants like Brianna's family moved to the area in the 1940's & 50's & continued the Chinese legacy of growing tobacco. It was converted into a wood fired pizza restaurant by Briana's late-mother.

Their Italian heritage shows through in the building design, featuring a typical Italian al fresco seating area, complete with large paving stones, wooden tables and big wicker arm chairs. You can see through into the stainless steel through large windows, whilst also having wonderful views over the garden, where you can drag plastic chairs out during the summer months, or the neighboring paddocks depending on your vantage point. 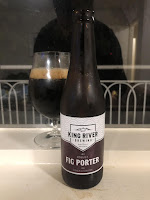 This area adjoins the small taproom, housed in the old tobacco kiln whilst the brewery is in the tobacco grading shed. The taproom features 6 rotating taps, including 2 brand new beers on the day we visited. Brianna's mothers legacy is continued by the couple, who's brewery serves small wood fired pizza's alongside their beers. They are supposed to rival those of 400 Gradi - a Melbourne restaurant which once took out the World's Best Pizza title - and I have to say I was impressed!

I deliberated for ages before settling on the Fig Porter to review. I initially thought a Fig Porter was a strange idea before a beer, before finding out that the brewery has a copse of Fig Trees on site. The resulting beer is beautifully balanced with the sweetness of the figs counteracted by the roasty malt character. It's a beer that really evolves as it warms, with the fig flavour becoming more and more pronounced throughout drinking.

Remember it's always Beer O'Clock somewhere in the world!
Posted by Noz at 06:11