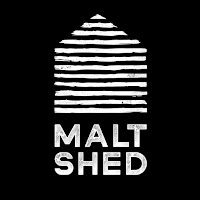 STATS
Malt Shed was started by three mates, Andrew Bett, Grant Jones & Matt Saunders, who wanted to bring craft beer to their hometown of Wangaratta. Grant was an avid homebrewer who in August 2014, at a whiskey tasting event, managed to convince Andrew & Matt that Wangaratta, a town of almost 30,000 people 250km NE of Melbourne, was ready for a craft brewery. It was the first brewery to operate in Wangaratta since 1887! 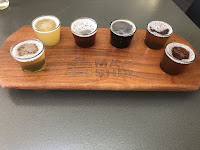 It took them a while to find a suitable site, before they eventually settled on an old farm supply store that had recently been operating as an Italian Restaurant. They ran into all the usual issues that brewers face, before being able to begin renovations of their building in late 2016, before opening to the public in July 2017.

Malt Shed first came to my attention properly when they were still known as Malt Shed Brewery. Earlier this year they reached an agreement with Lion Nathan, who opposed their trademark due to the similarity in name to their Malt Shovel Brewery, where they got to keep Malt Shed as long as they dropped "Brewery" from their name.

As the name would suggest, Malt Shed brew predominantly malt forward beers in a shed. To call the space a shed would be to do it a disservice. It's a large light industrial warehouse, which has had some plasterboard added to improve the aesthetics. There's sturdy leather chairs and wooden tables of all sizes, ranging from 2 seaters right up to large parties. Out the back is a decking area & large bricked courtyard that backs onto One Mile Creek.

I was intrigued by their decision to have some macro offerings (CUB) products on tap next to their own beers - of which I think there were 11 on. I wonder if this is a way to get more locals in the door who are a bit hesitant about the whole craft beer movement. I'd be really interested to know how they are going converting those drinkers, even if just to their lager offering. 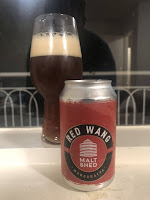 The food offerings clearly designed to be shared amongst groups, with a focus on American BBQ. Everything we had was delicious; from the onion rings, to the wings, to the pulled pork. The service was great & they had a huge array of hot sauces, which is always a plus!

I'm reviewing Red Wang, their Red IPA, which incidentally was their first beer to be canned. It has one of the better malt bases I've had for the style with layers of biscuit & caramel laying the platform for the all Australian hop bill to shine. The Ella & Galaxy provide all the tropical fruit and citrus notes you'd expect, there's some bitterness, but it doesn't override all of the sweetness of the malt bill. It's a beer I'd highly recommend.

Remember it's always Beer O'Clock somewhere in the world!
Posted by Noz at 19:21