STATS
Social Bandit was started by Jeff & Jeanette Whyte in 2015. If those names sound familiar to you it's because they owned and operated the old Jamieson Brewery for 14 years until they sold in 2013. They spent a few seasons managing venues in the Mount Buller ski fields, before deciding they wanted to run their own hospitality venue again.

First they had to find a site, in the end selecting the warehouse site on the outskirts at Mansfield for it's ability to produce enough beer for a wholesale operation as well as servicing the local community. November 2014 saw them order their Austrian built copper brewhouse from Japan. It arrived in Mansfield the following February, with no English instructions. Jeff spent the next several months putting together a 10,000 piece stainless steel & copper jigsaw puzzle!

The venue definitely surprised me a little when I walked in, with it being much larger than I expected. They had a huge array of fermenters at the back of the brewery, behind the impressive copper brewhouse that really draws your eyes as soon as you enter. The whole thing has got an industrial vibe to it - with almost everything you can see having been recycled, from pallet tables to the tasting paddles made out of the slate from the Jamieson Post Office roof, which was recently replaced. 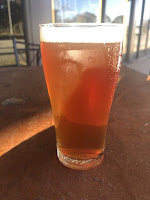 They've become well known for their pizza, as well as their beers, we unfortunately didn't indulge in any having already eaten but the ones we saw looked great. Unfortunately, I can't say the same thing for the service - with the guy on the bar seemingly more interested in talking to his friends than serving beers... Hopefully just an off day & not a sign of wider issues.

I really ummed & ahhed before settling on The Beast. It's a revitalization of the beer that really endeared Jamieson Brewery to the craft beer public back in the day. While my memory of the beer isn't perfect, we are talking 6-7 years since I last had it, this is a good representation. It's dank, it's bitter, there's a bit of that marmalade thing going on & there's plenty of malt. It tastes like the IPA's that really got me into IPA's way back when!

Remember it's always Beer O'Clock somewhere in the world!
Posted by Noz at 22:05