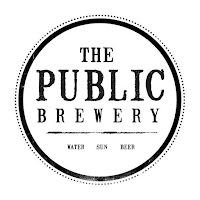 STATS
The Public Brewery is located in Croydon, a suburb of Melbourne that certainly wasn't known for its plentiful craft beer offerings. It's at the doorway to the Yarra Valley approximately 40 minutes drive East of Melbourne. It's a brewery which offers a number of services that many others don't - it's a one stop craft beer stop.

In 2013, local cafe owner Dale White & his wife Bek dreamt of bringing craft beer to their neck of the woods. They teamed up with local homebrewer Brendan Guild to make it a reality. The idea came to Dale when he noticed the local grain store & auction house had fallen into disrepair and plans were being made for its demolition.

Rather than let that happen he set about attempting to secure the site, with the idea to have a brew on premise facility with a good hospitality offering. They were successful & then spent several months dealing with planning & building issues before slowly opening the various elements of their business.

The bottle shop, which is still there today, opened first at the end of 2013. This was soon followed by a bar, complete with kitchen & beer garden. The 8 x 50L brew it yourself kits, where anyone is able to learn to brew,  followed before the brewery proper was installed. The kit at Croydon is only slightly larger than the brew it yourself systems at 250L & it quickly became apparent that they would need more capacity. A larger production brewery was installed at 100 Acres in Warrandyte in 2016.

It's a really nice venue. It's a old brick warehouse that they've done significant restorations to. As you walk up to the building you're struck by the amount of plant life there is, in planter boxes & all over the walls of the warehouse. You enter through the small, tidy bottle shop that proudly stocks only independent products, before continuing past the small batch kits to the main bar area. The bar area has an array of timber tables of varying heights & sizes and has been nicely fitted out. 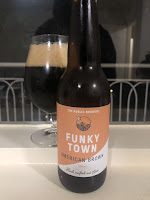 Not much has changed in here since my last visit 4 and a half years ago - there's still plenty of exposed brick, aluminium & greenery. The staff are friendly & thankfully they had more of their own beers on! My favourite part of The Public Brewery experience is the little outdoor area, with a couple of tables & a small grassy area it's a great place to relax with a beer in hand. The food is also really good & changes with the seasons, again focusing on local produce.

I've ended up with Funky Town, their American Brown Ale, to review. It's a style I love and one that isn't seen anywhere near enough in this country. This one is probably roastier than I'd expect for the style, with bitter coffee & roast flavours overpowering the underlying caramel sweetness. It's quite an easy sipping Brown Ale & one I'd happily enjoy by the pint, next to a fireplace in winter.

Remember it's always Beer O'Clock somewhere in the world!
Posted by Noz at 06:05