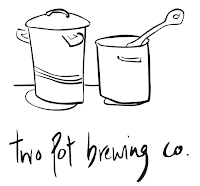 STATS
Two Pot Brewing Co has quite a history for a brewery I'd never heard of! Brothers Brendan & Joe Kellaway had been passionate home brewers for years, saving up money to one day start their own brewery. Their first steps into commercial brewing were taken Brendan's garage in Wodonga in 2014. At the time they were predominantly selling beer to one bar in Sydney, which happened to be Joe's local, when working his day job as a Barrister.

Over time they outgrew the Wodonga garage & in 2017 moved to their family property outside Yackandandah in Victoria's High Country. There they constructed a brewery that collects rain water & has enough solar panels to sustain their single phase power requirements. They've got 4 x 500L fermenters in addition to their brewhouse which is made from converted dairy equipment. 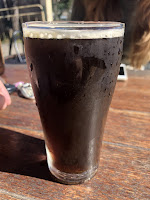 While not an official tasting room, you can always find Two Pot Brewing beers on tap at The Star Hotel, Yackandandah. It's their local pub, and a fantastic old country pub to boot, & their strongest supporter. At the time of writing they had 4 beers on tap Koelsch, APA, Dunkel & Black. The Star has developed a reputation for excellent American BBQ, if that's your thing.

I settled on their Dunkel. It's not a Dunkelweizen as the name may suggest, however a Dark Ale with the name a reference to it's European influence. It's a tasty little Dark Ale at that! Chocolate dominates at first before some caramel and roast notes begin to come through. It's mildly bitter with a touch of old world grassy notes apparent right at the end. I have to admit that it went down dangerously well & I would've quite happily sat their all day if it weren't for my tight time schedule.

Remember it's always Beer O'Clock somewhere in the world!
Posted by Noz at 19:53