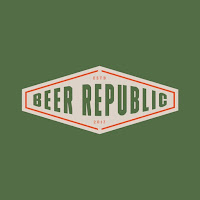 STATS
Beer Republic is the newest kid on the Victorian craft beer scene. They opened on Father's Day 2019, in one of the fastest growing parts of Melbourne but one that has long been devoid of good beer options. It's a bold decision to open a craft beer venue in an area like Epping, especially one of the scale of Beer Republic.

It certainly isn't your standard start up! It's housed in the bottom of the Mantra Hotel on Coopers Road, Epping - just down the road from the hospital and across the road from the Melbourne Market. It's also clearly very well financed; as the fit out is fantastic & using furniture made in Melbourne can't be cheap!

Beer Republic are also sporting a Smartbrew System, the first brewery in Victoria to utilise the technology. For those who don't know what Smartbrew does, it basically allows restaurants/hotels to "brew" their own beer without the actual brewing process. Simply put they receive fresh wort kits add it to the fermenter & add yeast, dry hop additions etc. The fermentation is controlled from the Smartbrew offices in NZ & there is little required from the proprietor. The system also cleans itself as soon as fermentation is finished and the beer is racked out.

They've smartly split their range into two brands; the Beer Republic brand focusing on clean beers, whilst a separate brand, Twist Brewing, focuses on sour beers. In an area that isn't as immersed in craft beer I think it's smart to separate the two, so that people don't go away bad mouthing the beer when they don't understand the style. They've got a clean lager in their range which they hope to use to convert Carlton Draught drinkers across. 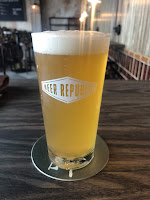 As you can see in the image above, the brewpub has quite a lot of wooden elements as well as large windows allowing plenty of light in. There are some boothed areas, as well as a nice secluded area around the corner from the main bar with a cooper fireplace. There's leather bound menus, exposed concrete; it really could be a trendy Melbourne bar. The food offering was really impressive, with a menu that wouldn't look out of place at a gourmet pub.

I was driving on the day I visited so only had the chance to taste one of their beers; the Hazy IPA. I got a whole heap of orange peel on the nose, with heaps of orange continuing onto the palate. There was also a good hit of passionfruit on top of a slightly sweet, creamy base. I was quite impressed with the beer, it's definitely a spot worth checking out.

Remember it's always Beer O'Clock somewhere in the world!
Posted by Noz at 19:43