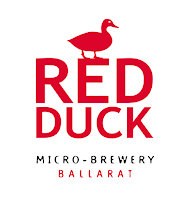 STATS
Red Duck is one of the more misunderstood brewery's in Victoria. It was initially founded in Lake Purrumbete, near Camperdown, in 2005 by husband & wife team Scott & Vanessa Wilson-Browne. For a number of years, the Red Duck facility at Lake Purrumbete was the only brewery between Adelaide & Geelong, a distance of over 700km! 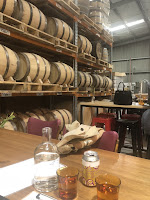 Issues at the Purrumbete Homestead, where the brewery was originally based, saw the Red Duck team pack up and head ~100km to Alfredton, on the outskirts of Ballarat in late-2011. There they found themselves in a much more suitable, light industrial warehouse with plenty of room for expansion & for the first time a cellar door.

The expansion didn't go as many would've predicted. Rather than installing a bigger brewhouse and add fermenters, in 2016 Scott opened Kilderkin Distillery, in the same facility as Red Duck, with Chris Pratt. Since then a number of barrels (pictured left) have found their way into the brewery, while a lovely copper still takes pride of place on the right hand side of the back tasting area.

Scott's beers, and I think this is where the misunderstanding comes in, have always been weird. Sure they have a core range with a Pale, an Amber & a Porter (alongside others), but that's not what the majority of craft beer drinkers know Red Duck for. They've become known for brewing beers with any number of adjuncts, & of course who could forget their Gruit's & Egyptian Bread beers? At one stage, 4-5 years ago, the brewery had 50+ beers available now it's a far more manageable 15-20.

It's this sort of eccentricity that made my visit to their tap room seem somewhat underwhelming. The venue was pretty normal. There's a small office that has been built into the warehouse for tastings & takeaway sales. A window looks through into the brewery & distillery where there are more tables, alongside a wall of barrels filled with spirits & beer as well as plenty of heaters to take away the cold that Ballarat is known for. 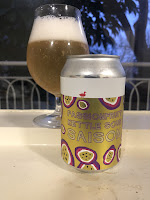 I was intrigued by their decision to not have taps at their tasting room. All beers you try are from a bottle or a can. I didn't get a good answer on why, although I assume it's something to do with install cost or licensing. I saw them crack all 4 beers for my tasting paddle, which makes me wonder if they then hold those beers for the next person? Or whether they only pour the taster...

The beer I'm reviewing is their Passionfruit Kettle Sour Saison. It's a really interesting little beer, which has the added bonus of clocking in at only 4.2% ABV. There's plenty of passionfruit, I'd hate to know how much went in to get this much flavour, & it's reasonably sour. In one of the cans I had I noticed some Saison-esque funk, however that wasn't apparent in the other two. It's a really refreshing little sour!

Remember it's always Beer O'Clock somewhere in the world!
Posted by Noz at 04:48

Email ThisBlogThis!Share to TwitterShare to FacebookShare to Pinterest
Labels: Australia, Kettle Sour, The Year of Local