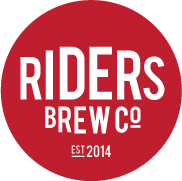 STATS
Andy Gargan, better known as Shandy or the guy who hosts Ale Stars in beer circles, was just like any homebrewer brewing in his garage in the inner Melbourne suburb of Elwood. Over the years a number of curious neighbors dropped in for a chat or a beer during his many brew days & before long his garage became something of a cult local Friday night hangout.

Unlike most homebrewers, he happened to have a neighbor by the name of Gus Kelly, of Kelly Brothers Cider & Kelly Brook Winery. This quirk of the universe eventually led to Andy & Gus starting Riders. Gus just happened to have the old Coldstream brewhouse stored in the Moorabbin warehouse where they bottle the aforementioned Cider, making it comparatively easy to start out.

The brand is named after the trio's (including the other Kelly Brother, Phil) shared love of riding - be it skate boards, snow boards, surf boards or mountain bikes. Over the years there's been a few changes; Michael Leslie, co-owner of Black Arts Beer, has been brought in as a full-time Head Brewer & is currently undertaking a revamp of the beer range. 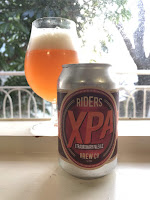 If you've been to a winery in the Yarra Valley you should have a reasonable understanding of what you're walking into at Kelly Brook. There's picturesque views of grape vines, the tasting room is rustic & they serve some lovely cheese platters that pair beautifully with their beer/wine/cider.  There's no restaurant here so keep that in mind.

I'm reviewing their XPA, one of their beers I've never had before. I was quite impressed with the beer; though it's probably more in the style of an APA. There was good biscuity malt character, which was offset by bitey citrus hop notes - dominated by orange. There is also some resinous notes in there. It's beautifully balanced and a beer that I'd happily sit on all afternoon.

Remember it's always Beer O'Clock somewhere in the world!
Posted by Noz at 17:07