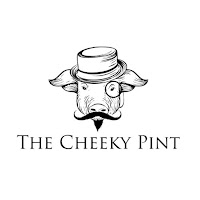 STATS
One of a number of venues that I have heard of for the first time through this endeavour was today's review of choice; The Cheeky Pint. Located in the old Barkly Hotel, on Barkly Street in the middle of Footscray, owner Mitch Peacock had hoped to have a fully functioning brewpub on-site come opening weekend in September 2018.

Red tape ended up quashing that dream and saw Mitch act like a gypsy brewer of years gone past, brewing his beers literally wherever he could find tank space. He's now managing to keep a core range of 5, 4 beers & a cider, on tap at the Footscray pub alongside 5 taps & 3 handpumps serving either his own limited release beers or offerings from other small independent producers.

The venue has been massively renovated from it's former days as the Barkly Hotel. The new look is modern & what you'd expect to find at most new high end pubs. What you don't see everywhere is the five distinctive copper serving tanks behind the bar. They are particularly eye-catching with the light glinting off them, almost drawing you towards them. 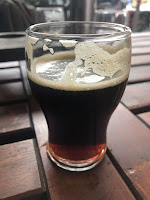 Joining Mitch is chef Massimo Spedalletti, who's spent time working as head chef in both Italy & Australia. Massimo has previously worked at a hop farm & has reportedly mastered the art of pairing beer with food, utilizing the skills he learned in his homeland whilst combining them with craft beer & Australian pub staples.

I always struggle to pass up a hand pump offering; so when I saw Raspberry & Blueberry Stout on hand pump there was only one way this review was going! It's a really impressive beer, with a cavalcade of chocolate & raspberry flavour. There's no hint of blueberry that I could detect, although it may well be hidden under the sweet chocolate.

Remember it's always Beer O'Clock somewhere in the world!
Posted by Noz at 05:04

Email ThisBlogThis!Share to TwitterShare to FacebookShare to Pinterest
Labels: American Stout, Australia, The Year of Local