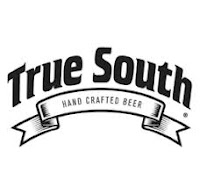 STATS
Grant & Suzanne Dow opened True South in 2009. They opened in Black Rock, a suburb about 20km S.E. of Melbourne, between better known suburbs Sandringham & Beaumauris. Their venue, when they opened, was a restaurant & with it's own microbrewery something that would not be uncommon now, but would've been almost unheard of in 2009!  2014 the kit went out with Renn to Blackman's in Torquay - where their beers are now brewed.

Since 2009 True South's identity has changed quite a bit. Firstly, they're now an Argentine restaurant - although that change happened very early. Secondly, and probably most significantly for this audience, they no longer brew their own beers. Their last on-site brewer, Renn Blackman, took the kit with him when he opened his own brewpub in Torquay in 2014. Renn has continued to brew the True South beers, which are available for onsite consumption at the restaurant & apparently wholesale, but I can't recall seeing their beer elsewhere for years.

The biggest obstacle I see for True South is it's location - it's very hard to get to by public transport & is a long way from anywhere, making it a reasonably expensive Uber/Taxi. Thankfully, I had Lizzie drive me down one Saturday afternoon. The building used to be an Auto Repair Shop & they've done a great job of transforming it into a pub/restaurant, with it's white paint job you would have no idea of the buildings history.

It's beachfront location is superb, they've got an open top deck which has great views & would be a great spot to have a drink on a warm summer's evening. The main dining area is open and light. There's a few high tables with stools at the front, whilst the rest of the seating is for tables of 2-6 people. The bar spans the whole of the left hand side as you walk in & is laden with 15+ CUB products, including Tank Carlton, & only one of their own offerings... 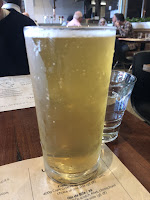 Beer aside, the wine list is impressive & the food menu is wonderful - making it particularly hard to choose! Lizzie & I eventually settled on an array of starters which we shared. The highlight of which was, at least in my eyes, the snapper cerviche or the tuna tacos. Considering we'd just got back from Hawaii, & the freshest seafood I've ever eate, that's high praise!

So I only had one choice for the review, although it's one I may have selected in any case. The New World Pilsner is a really nice example of the style. The base beer is clean grains and is free of any major faults, while the hop profile gains the grassiness & bitterness of the Saaz hops they've used as well as the unique gooseberry note from the Nelson Sauvin. It's a lovely beer that I would quite happily have several pints of.

Remember it's always Beer O'Clock somewhere in the world!
Posted by Noz at 23:22