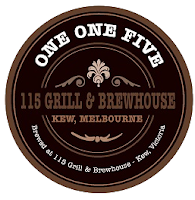 STATS
115 Grill & Brewhouse is located in the bottom of the 115 Hotel in leafy Kew in Melbourne's inner east. It's part of the famous Best Western chain as part of their Premier range. When they launched the hotel in 2012 owner Brice Hateley wanted a point of difference & decided to install a micro brewery - something that would've seemed far more radical at the time than it would now.

Despite never having home brewed before Brice decided to take on the role of head brewer. He brought in Vince Costanzo, a respected brewing consultant & set about learning how to operate his system & produce quality beer. Beyond that I don't have a lot of information, they operate more like a hotel than a brewery & get quite defensive when questions are asked.

The Hotel component of the venue has positioned itself well for conferences & the decor in the bar really reflects that. There's not a heap of personality with white walls a mix of large dark wooden group style tables. There's also a few smaller bar tables & a few benches around the edge of the bar to pull up a high backed stool. One positive of the venue is the big windows on the right hand side, where you can look through to the stainless steel.

Despite having the stainless proudly on display, I was immediately concerned for the beer quality by the number of spirits on offer behind the bar. This was further enhanced when I noted of the 40 or so, mostly older drinkers, in the bar when I visited that very few of them were drinking beer, always a worrying sign at a brewery... 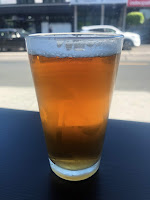 I took my seat at the bar & with some trepidation ordered a Pale Ale. It poured quite a nice deep golden/orange colour with a small white head comprised of medium/large bubbles. That's where the positives stop! There was very little aromatics coming off the beer, whilst the taste resembled bitter dishwashing liquid..

Generally I don't like writing reviews where I really have to rag on a beer, but this was an abomination! I would be upset if I brewed this at home, let alone if I brewed it with the intention of selling it! If this is the sort of quality they are dishing up regularly it's no wonder so few people in the bar were drinking beer!

Remember it's always Beer O'Clock somewhere in the world!
Posted by Noz at 17:10