STATS
Biersal Brewery is a family owned & operated brewery in the South Eastern suburb of Seaford, a stones throw away from the far better known Mr Banks. They were the newest brewery in Melbourne when I started writing this piece, until the wave of openings that struck on the weekend of the 8th of November & continued the following weekend... 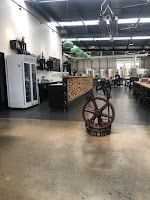 The head brewer is Ben Luxton, a professional brewer who studied in Palmerston (NZ) & South Australia before returning to his home state, where he honed his craft at The Public Brewery & at Boatrocker Brewers & Distilleries. All the while he was tinkering with home brew recipes in a custom built shed at home. The inevitable happened and Ben decided he wanted to do his own thing, which is where Dad Geoff comes in...

Geoff had always encouraged Ben to find something that he was passionate about & then find someone to pay him to do it. Unfortunately he forgot an important caveat; not me! Geoff was coming to the end of 40 years in the banking sector and was looking to do something else when Ben approached him to start a brewery. Needless to say, they entered into an arrangement where the bank of Mum & Dad financed a substantial portion of Ben's new brewery.

Like many new startups these days they took the risk of ordering equipment from China. They'd done their research & picked the supplier with the best track record. They took the risk on Chinese warranty & ordered a 500L brewhouse, with the idea of brewing to only service their brewpub. The family have lived in the South Eastern suburbs for the last 35 years & knew the area was perfect for their brewery - they just had to find the right space.

The name & logo was derived from old German folklore. A "biersal" is a type of kobold (spirit/sprite), that was thought to inhabit breweries as well as cellars in pubs. The spirits would help with menial tasks, such as washing bottles, glassware & kegs, in return for their share of beer. They were generally well-natured, however failure to pay them in beer often led to equipment going missing.

And find it they did! The brewery is housed in a large 70's brick warehouse on Hartnett Drive, Seaford. It's licensed for 75 people although it could easily hold more. The bar, featuring a wood mosaic pattern, is on the left side of the brewery about halfway down, whilst the stainless steel is proudly on display lining the back wall of the brewery. 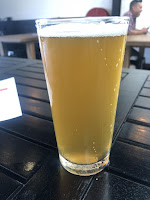 There's a whole range of different furniture, ranging from high tables with brewery stools, through regular tables with black backed chairs, to coffee tables with little arm chairs & even some little colouring tables for the kids. Coupled with the cafe food from The Black Goose, next door, & the promise of food trucks on the weekends this is very quickly going to turn into a locals hangout.

I was driving on the day I visited so I opted for one of the lower ABV options; the Hefe'Rye'zen. I was actually pretty impressed with the beer. It had the banana & bubblegum that you would expect from a normal Hefeweizen, with a good amount of spicy rye. I didn't pickup any cloves, however it may have been obscured by the rye. I'd be really keen to get back out and check out a few more of their beers!

Remember it's always Beer O'Clock somewhere in the world!
Posted by Noz at 16:15

Email ThisBlogThis!Share to TwitterShare to FacebookShare to Pinterest
Labels: Australia, Hefeweizen, The Year of Local