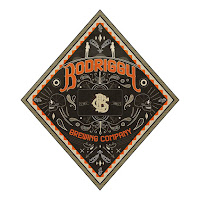 STATS
Bodriggy is one of the great success stories of gypsy/contract brewing in Australia. They started their journey contract brewing back in 2016 & for the first year literally had their beers pouring at bars they owned across Collingwood & Abbotsford! That has slowly, thanks to Yarra City Council, morphed into one of the more stunning brewpubs in Melbourne!

Jon Costelloe, Anthony Daniels & Pete Walsh are the gentlemen behind the brand. The trio have built a reputation for their excellent venues ranging from Dr Morse to The Aviary. They've recruited some of Melbourne's best bar tenders to man the bar at the new brewpub & it really shows when you get there as the service is superb!

I had been waiting with baited breath for Bodriggy to open for years! After all the delays they experienced in the building process they finally opened less than a month AFTER my work offices moved from just down the road. It took almost 4 years from when they took ownership of Bruno's old LPG conversion site until they opened, but god it was worth the wait!


Just like it's sister bar, Dr Morse, across the road; Bodriggy draws it's name from the building it is housed in. Before even Bruno's LPG conversion shop the building had housed an old stonemason's villa named Bodriggy. Like many of the buildings in the Collingwood/Abbotsford/Fitzroy area the name is adorned on the stonework of the building. It's still there today & the name stuck!

The brewpub is as spectacular as it is huge! They've licensed for 425 people, which would make it one of the largest brewery tasting rooms in Victoria. They've spared no expense with the fitout. It's one of those places where you could find new details every time you visit. There is greenery all around with full grown trees in the brewery!

As you walk through the large glass door you can immediately see through the warehouse to the stainless steel at the back of the brewery, behind another wall of glass. The majority of the brewery is wood lined, although there is still the exposed steel & brick you'd expect in Abbotsford. I particularly like the darker corner of the brewery complete with leather booths & brass light fittings. There's a mixture of table sizes, ranging from large group friendly tables to small tables suited to couples. 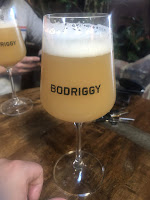 Food is not an afterthought at Bodriggy. They've hired John Dominguez as head chef, he's got quite a reputation having worked at Monte Carlo, Noma & Dinner by Heston to name but a few. He was born in Mexico before following his now wife to Melbourne & is drawing on his cultural upbringing to pump out some incredible Latin fare. His fish taco, which comprises smoked swordfish stuffed inside a giant jalapeno, is one of the best things I've eaten this year!

I'm reviewing their new Dayspring, it's a Kveik IPA which is packed with Azzaca & Idaho 7. It's the most Azzaca forward beer I've ever had! There is so much pineapple in this beer alongside orange juice, passionfruit & stone fruit notes. It's dangerously easy drinking factoring in its 7.1% ABV. Given the obvious turn around advantages of Kveik beers I wouldn't be surprised to see this one stick around.

Remember it's always Beer O'Clock somewhere in the world!
Posted by Noz at 00:53