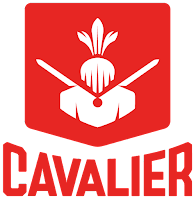 STATS
It's fair to say that Cavalier Brewing is one of the most influential in shaping the current Victorian craft beer scene. Interestingly though, it's not through their own beers that they've been particularly influential, but rather through the space & equipment that they let out to aspiring brewers who couldn't afford to build a brewery from scratch. 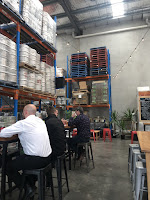 Cavalier Brewing was the brainchild of Steve Martin, his cousin Andrew Cronin & Heath Shirtcliffe, who he met on a dog walk of all places. After years of homebrewing they started out brewing commercially in 2011 on a tiny 100L system at the back of Heath's house in Pascoe Vale. Soon they realized this wasn't a sustainable long term plan and took their recipes on the road, to any brewery that would have them - most notably Prickly Moses.

Securing regular tank space was always difficult & so the trio found a warehouse in Melbourne's developing industrial west in 2012 and ordered their kit from China. They ensured they had excess capacity & space to allow aspiring brewers to be able to rent the brewhouse, install their own fermenter & be able to have access to a quality brewing facility whilst they grow their brands. Many of these brewers have gone onto bigger and better things with alumni such as Exit, Kaiju, Wolf of the Willows, Killer Sprocket & many more.

Cavalier's own brand has fallen by the wayside a bit in recent years. A re-brand in 2017 has definitely made the brand more visible than they once were & has seen the beers tweaked to be more in line with the modern palate. They are definitely not viewed with the same cache that they were maybe 5 years ago.

Interestingly I believe they are the only Victorian brewer with brewing operations overseas, quite a number export beer. They operate a couple of brewpubs with The Chancery Group in Bangalore, India. You can read about one of those brewpubs here, thanks to regular reader AJ's India Ale Trails blog. They also have plans for a production facility in the region - although that seems to have gone quiet with concerns about access to water.

It wasn't until September 2018 that Cavalier followed the trend and opened a taproom in a warehouse across the street from their production brewery, possibly to engage with customers they may have lost to more innovative brands. The tap room is in a new build concrete high ceiling warehouse with high level pallet racking stacked with supplies (kegs, pallets, flat packed boxes etc.). 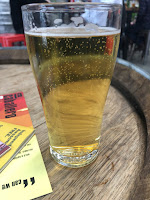 The bar is under a large Cavalier motif and features a wide array of beers, both Cavalier branded & some of their contract brewed offerings. There is an area for a food truck to be parked inside the brewery, which was doing a roaring trade on the day I visited. Seating is most high communal tables - whilst there are a couple of barrels with stools dotted around.

I settled on the Pilsner, which was one of the new additions to the lineup when they did their re-brand in 2017. It's a beautifully brewed Pilsner, with great clarity & cereal malt character. The hops are very traditional, offering grassiness and a little bitterness. I think it's a touch on the safe side, appealing to their local crowd, & that a touch more bitterness could really elevate it.

Remember it's always Beer O'Clock somewhere in the world!
Posted by Noz at 03:14