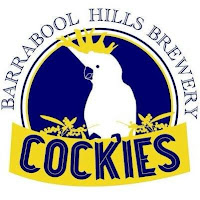 STATS
Cockies Beer is the brand of beers produced by the Barrabool Hills Brewery in South Geelong. Cockies was started by husband & wife team Jamie & Lizzy Roydhouse in 2014 as a contract operation, brewing out of Cavalier in Derrimut. After 6 batches Jamie decided to take the plunge and purchase his own stainless, eventually opening in South Geelong in June 2015.

Jamie's story is a little different to most new entrants to the craft brewing industry. After a long career in pharmacy Jamie decided to take his long term hobby of home brewing & turn it into a second career. In fact he started home brewing in the 1970's, before many of his fellow new brewery owners were even born!

The brewery is located in an industrial cul-de-sac, a stones throw from the far better known Little Creatures Brewery in Geelong. It's a relatively modern concrete warehouse, that was clearly a showroom of some description in an earlier life. You enter through a little reception area before entering the brewery proper. It's a welcoming little brewery with a small bar around to the right hand side. They keep a tight taplist with their 4 core range beers joined by two seasonals.

The stainless steel takes up the back left third of the warehouse and is mirrored by a cool room on the right hand side. There is a Cockies motif on the back wall, whilst various brewing supplies are neatly stacked around. The brewery is only open to the public on a Friday afternoon & accordingly the tables and chairs are all fold out picnic style stuff. It's definitely an older crowd than you'd find at most craft breweries, but it had a lovely relaxed vibe. 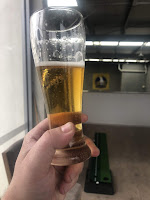 I think this adds to the charm of the brewery. It's a real family operation, with three Roydhouse's the only staff working on the day we visited. They offer free pool upstairs, while there is also a little putting game. There's also complimentary cheese platters & chips, for which they ask for only a small donation, while the jazz band on the night we visited were really good.

The beer was better than I expected at Cockies. The IPA was tasting seriously fresh! It was packed with Galaxy hops, which translated to an IPA with heaps of passionfruit flavours & aromas as well as moderate bitterness! It's one of the better traditional (read bitter not juicy) IPA's I've had this year!

Remember it's always Beer O'Clock somewhere in the world!
Posted by Noz at 17:03