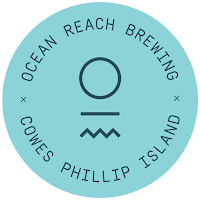 STATS
Simon Bismire started Ocean Reach Brewing in Cowes with his wife Alexandra & father Wayne. All three share a love of craft beer & after solidifying the idea to start a brewery on their honeymoon, Simon & Alexandra managed to rope in Wayne. The brewery was in serious planning from September 2015 before opening it's doors in December 2016.

I was amazed to find that Ocean Reach Brewing is the first commercial brewery to operate on Phillip Island. This may come as a shock to some of the older audience of this blog who may remember Penguin Brewery (now defunct) & Rusty Water Brewery (re-branded as Phillip Island Brewing Co). Neither of these entities ever brewed beer on the island, both having their beers contract brewed.

The brewery started in the tiny taproom that they have on the main street in Cowes. Their beers soon outgrew the space and the brewery moved 2km down the road. The taproom looks like a fish 'n chip shop from the outside, although in its past life it was a clothing store. It's a relatively small glass fronted shop with pristine white plaster walls - something you don't often see in a brewery! 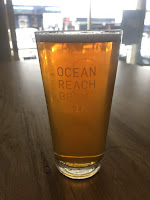 The fit out is also reminiscent of a modern burger/fish 'n chip shop with light wood top Scandinavian/Industrial tables. They have the ubiquitous brewery stools, although theirs are in a grey colour I can't recall seeing before. I didn't have any food there although I understand that they serve burgers and wings from a food van out the back.

I sampled the Pale Ale on the day I visited & was really impressed by it. It was a well balanced Pale Ale with good floral hops & the perfect amount of bitterness. The highest compliment I can pay it is that it strongly reminded me of the original iteration of the Hawkers Pale Ale.

Remember it's always Beer O'Clock somewhere in the world!
Posted by Noz at 03:04