STATS
Shiki Brewing is the house range of beers from the Lucas Group of restaurants & is primarily found at their restaurants. Before people jump down my throat about including Shiki & not including other house brands; Shiki is sold in select bottle shops from time to time. Therefore, under the criteria I set, it qualifies. Although I have to say I did think about it for a while.

Chris Lucas is the man behind the restaurant group, which now comprises Kong, Chin Chin, Kisume, Gogo, Hawker Hall & probably more that I've missed! Before he setup his own Asian dining empire he was the man running my local "pub" The Botanical. It was here that he began to understand the disregard in which big brewers hold good food, preferring him to push beer sales rather than focusing on the food offering. He ignored them & beer sales rose anyway due to the people flocking there to eat...

When he opened Chin Chin his customers were demanding a better product to accompanying the wonderful spicy food. Unfortunately Chris was locked into a contract with a major brewer at Chin Chin... This is when he had the idea for Hawker Hall, his Windsor based Asian style food & beer hall complete with 18 independent taps - naturally he would need his own beers on tap as well! Shiki is Japanese for formula & Chris certainly followed the right formula when he set up his own brand. 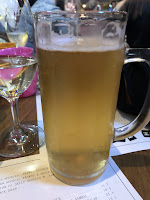 He interviewed a number of leading brewers before settling on Costa Nikias of La Sirene to design his beers. A number of iterations of the various beers were trialed, before settling on the right beers that would pair with his Asian inspired food. I believe the beers are still brewed at La Sirene, but haven't been able to confirm this.

This brings us to the review, I had their Lager recently at Hawker Hall. (Yes the photo is focused on the wine not the beer - I may have had a few...). The recipe is a simple German Pilsner, using Pilsner Malt & Hallertau hops. That follows through to the taste, it's a clean lager with citrus & grassy notes and just enough bitterness. It's a really nice accompaniment for the food on offer at Hawker Hall!

Remember it's always Beer O'Clock somewhere in the world!
Posted by Noz at 03:44