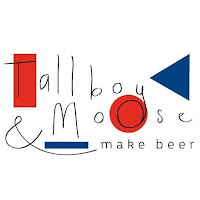 STATS
Tallboy & Moose is a brewpub located in Preston, in Melbourne's northern suburbs. It was founded by Dan "Tallboy" Hall, a rake thin Englishman standing the best part of 2 metres tall, & Steve "Moose" Germain, a Canadian who relocated to Melbourne from Toronto in 2012.

They met in 2012, not long after Steve arrived in the country, when Steve was visiting Moon Dog to get acquainted with the craft beer scene in Melbourne. Dan was working as a brewer for the eccentric Abbotsford brewery at the time & the pair immediately hit it off.

Barely a year later and the pair had started their first beer brand; the tiny Make Beer, which sold minuscule amounts of beer between late-2013 and early-2015. It quickly became apparent that they needed to make more beer & so the wheels were set in motion for Tallboy & Moose to become a reality. The pair spent the next few years gaining experience at different breweries & distributors before opening the doors to their own brewpub in 2016.

Just over three years down the track & the boys' brewpub is a thriving part of the local community, featuring 16 taps of their own beer. Like many people starting out their brewhouse is cobbled together from bits of old dairy equipment. It's a system that makes great beer, as Dylan & I found out 18 months ago. They've been regularly adding more fermenters to their brewing corner of the warehouse, although they're seemingly running out of room.

The brewpub is housed in your typical suburban warehouse. It feels very much like a warehouse when you walk in, albeit a nice one, with a few licks of paint and some plants hanging from the ceiling. As you walk in the bar is in the middle of the warehouse, which is relatively long and thin. The brewing area is in the back right corner & very accessible to have a look at. The back of the warehouse is taken up by a large coolroom completely covered in their branding. It also features Wee Man's Kitchen at the front; the Glaswegian inspired food offerings of Chris Orr. 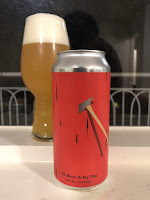 It's got a real homely vibe to it. The majority of the seating is long communal benches, although you can pull up a stool at the bar, where they've got up to 16 taps of their own beer on at any one time, with a few friends' beers filling the lines when their own stocks run low. There's also a few bits of mismatched seating at the front & back of the brewery if communal benches aren't your thing.

The beer I've chosen is actually a collaboration with one of the other best Hazy IPA producers in Victoria; Deeds Brewing. All Work & No Play is a fruit bomb, orange & pineapple flavours dominate, from a staggering 40g/L of hops! There's a touch of lactose but it's not overlying sweet, whilst it drinks dangerously easily belying it's 8.5% ABV!

Remember it's always Beer O'Clock somewhere in the world!
Posted by Noz at 02:18

Email ThisBlogThis!Share to TwitterShare to FacebookShare to Pinterest
Labels: Australia, Imperial IPA, The Year of Local