THE GREAT BOTTLE VS. CAN DEBATE PART 12 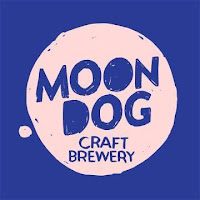 The Great Bottle vs. Can Debate

I was slightly surprised when I looked back & found that it had been almost five years since I'd done one of these! I guess that's a sign of the times with more and more craft breweries moving away from bottles. This segment really became the domain of the big brewers & feel by the wayside accordingly.

When I saw that Old Mate, the Pale Ale that is now driving Moon Dog's expansion to Moon Dog World & a 400% increase in production capacity, was to be canned I felt like we'd be a chance to reboot this segment. Luckily I was able to get my hands on a bottle & a can brewed within a month of each other, which should allow for the best outcome in this segment. As usual, I better stop typing & get these beers out! 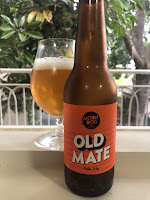 The beers pour an almost identical golden colour with a moderate white head on top. The head on the canned version is marginally larger, although this may be due to way a can pours versus a bottle. Both heads diminish to next to nothing relatively quickly. They're both exactly what I'd expect from the style.

Initially both beers smell very similar. They're both inoffensive with some cracker malt aroma up front. There's more on the hop front which initially smells a little green, despite both beers having been packaged for a few months. Once you get passed that there's some nice citrus & stone fruit notes. 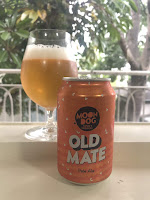 First impressions, I slightly preferred the bottle. There was a slight dirtiness to the can at first that the bottle didn't have. After a couple of minutes this was gone & the hops on the canned version were able to shine that little bit more than they did in the bottled version. Both follow the aroma closely, with malt taking a backseat to the grapefruit & peach notes from the hops.

This is one of the hardest decisions I've had so far, as the beers are so similar! Had they been brewed on the same day I feel I would've had an even tougher task splitting them. I'm going to have to give it to the can, by a whisker. It was probably warmer than you would drink the beer in a normal situation before the difference was noticeable though - so feel free to fire away on either packaging vessel, just get the freshest one!

Remember it's always Beer O'Clock somewhere in the world!
Posted by Noz at 00:41

Email ThisBlogThis!Share to TwitterShare to FacebookShare to Pinterest
Labels: American Pale Ale, Australia, The Great Bottle vs. Can Debate