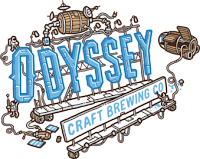 STATS
Odyssey Craft Brewing Co, originally Odyssey Brewery & Tavern, launched way back in 2012 in Mount Duneed. It's a suburb about 15 to 20 minute drive South of Geelong. The brand was started by Grant Byrne, a Geelong local, who had dreamed about having his own brewpub for the best part of 15 years before biting the bullet.

His venue was revolutionary for the region, only Forrest Brewing Co being open in the region & that being the best part of an hour away. He knew he was onto a winner when he had local visit, initially disappointed by the lack of Carlton Draught, but after some samples ended up trying their first Imperial Stout later that evening!

Grant operated a small 200L brewery in a room behind the bar at The Odyssey Brewery & Tavern from 2013. They peaked on a national front when their flagship Calypso Pale Ale placed 61st in 2015 Hottest 100 Beers, which resulted in them beginning to package their beer. After being readily available for the best part of 2 years, the beers began to disappear. 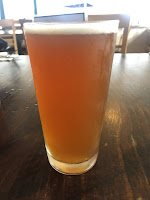 This came to a head in June 2018 when Odyssey offloaded the venue to The Hop Inn after 6 and a half years. You're still able to find their beer at The Hop Inn, which is a realatively open wooden pub with a beachside feel, befitting the area. There's plenty of surfboards around & they apparently serve a mean burger!

It was at The Hop Inn that I came across my Odyssey beer for this post; their Apocalypso Double IPA. It's very much an old-school IPA with plenty of caramel malt sweetness upfront, almost to the point of being cloying, before some hop bitterness cuts through along with plenty of pine. It's a nice beer, but is somewhat of a relic from a bygone era - possibly something behind their fading in the eyes of the public.

*I've received an update that Odyssey are currently on a short hiatus - with plans to relaunch soon.
Posted by Noz at 02:22