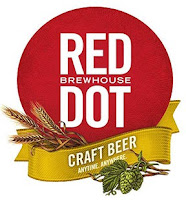 STATS
Ernest Ng was heavily ensconced in the construction industry in Singapore before falling in love with beer whilst on holidays in South Africa after being offered a home brew by two soldiers protecting wild life at Kruger National Park. Ernest had never heard of homebrewing before, but was encourage by the soldiers that it was easy and pointed him in the direction of a home brew store in Johannesburg - which would eventually provide the inspiration for the name of his commercial brewery.

That was 1997. Ernest spent the next 10 years teaching himself how to brew, before working through the complexities of opening a brewery in Singapore. Red Dot Brewhouse was opened in a reconditioned 100 year old military barracks in 2007. The business expanded rapidly with a second 300 seat brewpub opening in Singapore & demand for their beers from all around South East Asia.

So why are we talking about a Singaporean brewery in The Year of Local? Well, in 2015 Ernest & his daughter Crystalla Huang, a professionally trained brew master, decided to open a production brewery to meet their demand both at home & throughout South East Asia. After investigating potential sites in Thailand, Indonesia, Malaysia & China - they settled on a site in Truganina on Melbourne's western fringe after lobbying from the Victorian State Government. 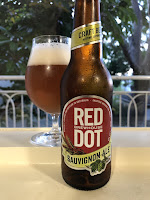 Despite this lobbying almost 4 and a half years on from the first beers leaving the Truganina site, the originally proposed beer garden & tap room hasn't eventuated due to council issues. Their brewery is one of the larger ones in Victoria at almost 2,000sq/m and annual capacity exceeding 2 million litres.

Sauvignon Ale is the only beer of theirs that I've ever come across, so I guess that's what we're reviewing. It's a really unique beer, which has been fermented with both beer & wine yeast. The resulting product has a slight vinous character accompanied by plenty of grapefruit & other citrus notes on top of what seems like a pretty solid Pale Ale.

Remember it's always Beer O'Clock somewhere in the world!
Posted by Noz at 03:05