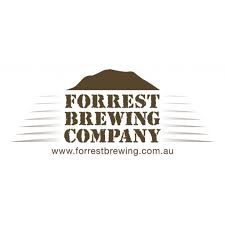 STATS
Forrest Brewing Company was founded in 2010 in the ex-timber town of the same name in the Otway Ranges. The timber industry has been a fading industry in Victoria, & particularly in the Otway's, since the 1960's. The town knew they had to do something to replace the timber industry, a feeling that was exacerbated by the closure of Forrest's last mill in 2003. The town's population fell to 170 from a peak of ~500 at the height of the timber industry.

The town set about attracting tourism dollars. They have invested in world class mountain bike trails, through the native forests that they used to log. The town needed some amenities for the tourists that were beginning to visit the town. In 2009 in stepped brother & sister team, Matt & Sharon Bradshaw. The duo purchased the towns old General Store that had fallen into disrepair and set about turning it into something...

When they bought the property they had no idea what they were going to do with it. They were simply backing that Forrest was a lovely place & that if they applied The Field of Dreams philosophy, it would work. After realizing that all the visitors were riding around of mountain bikes and might be thirsty they set about starting a brewery with the help of a federal government tourism grant.

The resulting venue is wonderful. It's now a bright blue, wooden building with plenty of outdoor seating for those mountain bikers finishing up their rides, or for those just keen to soak up the country air. Inside there are fridges filled with their offerings to take away, which have been in 500ml bottles longer than I recall any other beer being, as well as a window through to the brewery - a second hand 600L kit out of the 3 Degrees Bar & Bistro in QV. 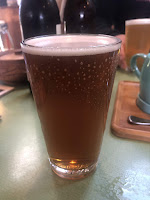 At Forrest the menu changes regularly & tries to source as much of their produce locally as they can. The late breakfast I had on my visit there was superb & paired really well with their malty range of beers. On the day we visited they had 8 beers on tap with a mix of core & seasonal offerings.

I enjoyed their midstrength when I visited, because I was driving & had to visit a couple of other breweries that day. The thing that sets it apart from other mids is that it's an Irish Red Ale. It's certainly not the "reddest" you'll find, but it has good malt characters & pleasant balancing earthy hops at the backend.