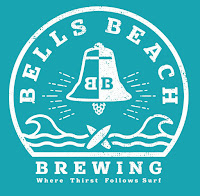 STATS
I imagine that opening a brewery on Victoria's Surf Coast was a long way from the thoughts of Adam Smith & Jono Moscrops when they were growing up in England. But fast forward through engineering degrees back home, emigration to Australia & years spent working together for Ford in Geelong & that's exactly what happened!

There's more to their brewing story than I knew. Like most who end up opening a brewery of their own, they were avid homebrewers. Having some beers one afternoon they thought their beers would be a good addition to the local beer scene. Like so many before them, & certainly after them, they reached the critical now or never moment; & they took the plunge!

They released their first beer, brewed at Cavalier, to market in late-2015 & spent the next 3 years gypsy brewing at Cavalier, Cockies, Rogue Wave (now Salt) & Bellarine Brewing. In 2017 the duo approached sports photographer Jeff Crow to buy a couple of photos to give local character to their beers, not only did they end up with those photos but also a new business partner. Jeff's arrival & attention to detail they set out to find the perfect location to set down roots in their local community.

The end result is a warehouse behind another warehouse halfway along an industrial street in Torquay. It's an interesting space with high ceilings, tanks prominently on display behind the bar & a huge motif comprising the companies logo plastered all over the back wall. The majority of the tables are quite high, although I'm not sure if that was due the event happening that night, as well as a few couches out the front. 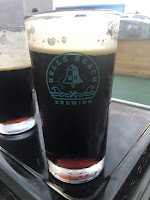 We arrived to a packed venue on Rugby World Cup Final night. There was a big crowd in, and the majority of them were really up for the game, despite the dreary weather in the coastal town. It may not have been the best way to assess the brewery - but they were certainly capable of handling a crowd & the beers were tasting great.

As soon as we looked at the tap list we knew what we had to have on a cool, damp night on the Surft Coast; Steps Session Stout. It was the perfect beer after a long day of visiting breweries, characterized by this big dark fruit aroma that paired nicely with the more traditional chocolate & roasty notes. It drank very easily, as you'd hope at 4%, but it wasn't thin at all. It's a beer that I'll be looking to stock my fridge with for winters to come.

Remember it's always Beer O'Clock somewhere in the world!
Posted by Noz at 23:42

Email ThisBlogThis!Share to TwitterShare to FacebookShare to Pinterest
Labels: Australia, English Stout, The Year of Local