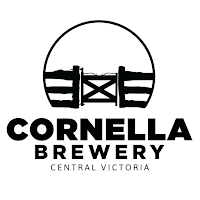 STATS
The Shiraz Republic is a winery in the Heathcote Wine Region, located about 25km to the north of the town that gives the region it's name. It was started by Brian Spencer in 2006 & they have become known for their big fruit forward Shiraz's, that the region is known for, as well as for being one of the few wineries that sells Heathcote grapes direct to the public.

Why am I talking about wine? Well, that's where Brian's son Spencer Page comes in. Spencer studied Chemistry at University, before he decided to join the family business in 2015. He'd previously spent a year in Scotland where he'd developed a love of real ale & saw a way to use his chemistry degree, add value to the family business & indulge his passion. He roped in friend Matt van Run who was easily convinced to start a brewery rather than look for a real job.

They installed a tiny (by commercial standards at least) 200L system which they picked up from Cheaky Peaks in Wodonga & set about trying to replicate the real ales that Spencer had fallen in love with. They were so set on this track that they launched their brewery as Cornella Real Brewery. Within two years of operating, gone was the name "Real"; simplified to just Cornella Brewery, along with the focus on just real ales as they began producing the full spectrum of styles.

The setting for the venue is typical of Central Victoria. To get to the brewery you take a left turn off the narrow highway onto a dirt track, pass numerous dusty fields with brown grass before arriving at the green oasis of the winery. There are a number of artefacts from the history of Cornella dotted around, from farming equipment to the towns old Post Office. 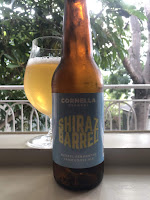 The cellar door is housed in a new looking corrogated iron shed. There's a shade cloth over a decking area with a few tables, although the majority of people were seated at long benches under the gum trees in the yard. It's a really lovely spot for a beer, we didn't have any on the day but they also do pizzas which from all reports are excellent!

Amongst their relatively broad array of offerings are a couple that incorpoates their wine roots, which is naturally where I had to go for the beer. Shiraz Barrel is billed as a Barrel Fermented Farmhouse Ale. It's got light bready malts, some grassy hops, plenty of funk & some shiraz barrel notes that comes through. I'm intrigued by the lack of colour that comes through, considering how much flavour comes through. I assume they must've been relatively dry barrels. There a brewery well worth visiting in an area dominated by wine.