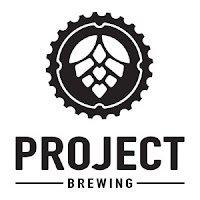 STATS
Project Brewing was the long term dream of husband & wife team Braden & Caitlin Beggs. Braden began home brewing in 2002 & as is quite often the case this hobby spiralled out of control. He'd spoken to Caitlin for years about his dream brewery but the idea on really crystalized in 2016 after visiting the newly opened Watts River Brewery.

Both really resonated with the industrial location & feel of the brewery, combined with the passion the brewers had for their product. Braden managed to convince the team at Watts River to teach him the ropes of running a commercial brewery, whilst they advanced their plans for a space of their own. In September 2018 they secured a warehouse in industrial Rowville & began setting about turning it into a space they could call their own. With the help of family & friends they opened the doors to their "project" brewery taproom in late June 2019.

They've done a really good job of personalizing a pretty generic looking warehouse. They've given the front a black paint job, with their logo splashed across the top in white. Inside is tables they've built themselves, that have been branded with their logo. Their kit is at the back left of the building and is capable of producing batches up to 1000L. Down the left side of the warehouse are the toilets, bar & coolroom. They've fitted it with corrugated iron & timber to make it look like an outback pub & it's come up a treat. It gives it a really unique feel in an industry that can be a bit samey.

It's rare I comment on social media but; they have the hardest beers to find on Untappd that I've ever come across! The word "Project" appears in so many prominent brewery names & their beers are only named after the style... Their Instagram page is also worth checking out, it shows a cross section of their family life & their journey building their brewery. Their beers are available almost exclusively at their taproom at the moment, although they are slowly starting to get beer out to local restaurants. 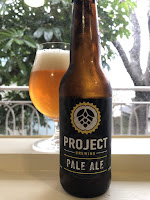 In terms of food currently they are offering snacks & have food trucks from time to time. When there are no food trucks they actively encourage you to bring your own food/order delivery; so much so that they even supply the plates & cutlery! The couple have plans to one day have a larger brewery & have cited Stomping Ground's Collingwood Brewery as their inspiration.

I'm reviewing their Pale Ale, one of the two beers they bottle. The Pale Ale is really nice. It's slightly old school with big floral component complimented by some citrus, as well as just enough malt character to provide balance. It's got a good amount of bitterness & is a Pale Ale that I'd quite happily drink all afternoon.

Remember it's always Beer O'Clock somewhere in the world!
Posted by Noz at 03:48