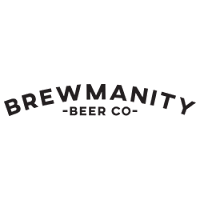 STATS
David Neitz is best known as the longest serving captain & player of the Melbourne Football Club. Since retiring from the AFL in 2008, "Neita" has spent years working in and around sport in Stakeholder Relations. In 2015 he started Brewmanity Beer Co, a move that was initially seen, somewhat cynically, as a sportsman trying to capitalise on a growing segment.

A dig further into the people behind the brand & the reasons behind it shows that to be anything but. Alongside Neitz are experienced beer people in Jaime Fox, a key figure in early Matilda Bay & later at CUB, Michael Jontef, whose brewing career at CUB dates back to the early 1970's, & Paul Hopgood, who has been in hospitality since the 1990's.

The catalyst for Brewmanity was the diagnosis of Neitz's long time coach, Neale Daniher, with motor neurone disease (MND). They donate a small amount from each beer they sell towards MND research & have donated over $150,000 since they were founded in 2015. They've also managed to donate almost 60,000 days of fresh water to communities around the world that don't have access to it regularly. 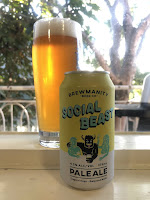 Brewmanity have dreams of one day opening their own facility in the inner suburbs of Melbourne. For the time being their content brewing their beers on the lovely system at Colonial in Port Melbourne, with Michael keeping a watchful eye over proceedings.

I had to review Social Beast, the beer that indirectly references MND - the disease that Neale Daniher refers to as The Beast. It's a really well constructed beer, showcaing the tropical notes from Aussie hops Ella & Vic Secret on a light biscuity malt background. It's the sort of beer you could happily sink pints of watching some sport, all with the added bonus of supporting some great causes.

Remember it's always Beer O'Clock somewhere in the world!
Posted by Noz at 05:47