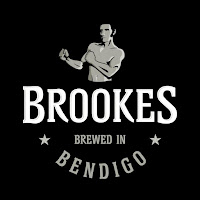 STATS
Doug Brookes & his partner Melissa Church opened the first major brewery in Bendigo for decades when they opened Brookes Brewery in July 2013. After spending the best part of 20 years working in the corporate world mostly in aviation. An avid homebrewer Doug decided it was time to give away the corporate lifestyle & engage in his passion.

The plan wasn't always to setup in Bendigo. Doug & Melissa spent a long time looking for suitable venues before stumbling across the old abattoir on Piper Rd, East Bendigo. Once they settled on Bendigo the couple moved to the area and began attempting to convert drinkers in a relative craft beer wasteland.

It's taken some time but they've made a really good fist of the task. They've helped a number of brewers in the region, & beyond, get a start in the industry by offering their spare tank capacity to anyone who wants to utilize it. In June 2019 it was announced that they'd bought 40 Acres Brewing, a brewing company that'd always brewed out of their facility, from founder Trevor Mitchell.

In mid-2019 the couple put the business up for sale as a going concern. They believe they've taken the brewery as far as they'd like to, producing about 100,000 litres of beer per annum & servicing the greater Bendigo region. They say the business is ripe for someone who wants to expand the brand throughout Victoria & possibly beyond. At time of writing they have not sold the business & are still operating it. 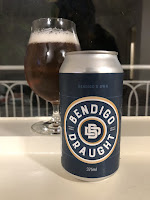 The brewery is located on the fringes of Bendigo in an old industrial estate. If you can imagine a large 70's food production facility with brewing equipment in it you've nailed Brookes. It isn't fitted out with a taproom, although they are open for takeaways only on Friday afternoons.

In honour of their aim to be the brewery for Bendigo, I've decided to review their Bendigo Draught. I was expecting a pretty bog average lager, appealling to the local macor lager drinkers. I was pleased to be wrong; there was a fair bit of malt accompanied by that distinctive grassy/earthy Pride bitterness.

Remember it's always Beer O'Clock somewhere in the world!
Posted by Noz at 04:47