STATS
Hawthorn Brewing Co is one of the earlier entrants to the Victorian craft beer scene & certainly one of the earliest contract/gypsy brewers. Founded by Hamish Reed, Peter Willis & Darren Milo; 3 family friends who grew up in the Melbourne eastern suburb of Mooroolbark. When they launched in 2009, contract/gypsy brewing was a seriously divisive issue with many believing that owning your own stainless steel was key. 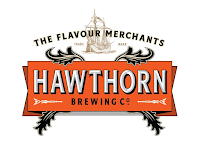 Their story is similar to many you've read in this series. Hamish homebrewed beer & brought it to BBQs, initially it "pretty bad" but over time it got "better & better". His mates, namely Peter & Darren, convinced him that they should try to sell it commercially.

In 2009 there was next to no second hand brewing gear in Australia & rather than splash out on new kit they went down the contract brewing route. Their beers were initially brewed at Mildura, before outgrowing the production capacity & moving to Southern Bay. My understanding is that their beers are currently brewed by Tribe in New South Wales, however I haven't been able to confirm that as Hawthorn haven't responded to me.

Their beers have been successful, winning numerous awards at the International Beer Challenge, including Supreme Champion Brewery in 2013. In early 2017 a controlling stake in the business was acquired by Dixon Hospitality Group. I'm not sure why they decided to upgrade their logo to the minimalist effort seen above, the old one had some character & I really liked "The Flavour Merchants"as a byline. I assume that was a DHG decision as at the time of the sale it was noted that they would be provided not only with additional capital but also marketing resources. 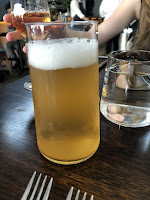 At the time of the takeover it was reiterated that the long term aim for the brand was still to have it's own venue one day. That has yet to materialize & I'm skeptical that it ever will. Although in saying that, if they end up with a brewpub type facility in Hawthorn, possibly at the current Beer Deluxe site, I'm sure it would do well - as there aren't any other breweries nearby.

I'm reviewing their Stand Up Pilsner, which I believe is the same Pilsner as before their rebrand. It's a really solid Pils, with good spicy hop character on a pretty simple malt bill. It's exactly what you want in a Pilsner, although the new packaging is horrible!

Remember it's always Beer O'Clock somewhere in the world!
Posted by Noz at 05:33