STATS
This is another reminder to brewing companies (all companies, really) to only have social media/emails if you intend on using them. This is going to be a relatively brief one, but the show must go on if we're to finish this in 2020... Noble Boy was launched in March 2017 after a conversation between mates that many people reading this will have had; "let's start a brewery". Normally in the clear light of day, that conversation is forgotten or labelled a silly drunken idea.

This particular conversation took place in the front bar at Fitzroy's iconic Napier Hotel & involved it's eccentric publican, Guy Lawson. Joining Guy were current & former AFL footballers Ben Stratton, Joe Daniher & Sam Grimley, as well as Vedran Sabic who was in the middle of completing his Bachelor of Business at RMIT where he happened to be majoring in Entrepreneurship.

Vedran's connections proved useful, a fellow student at RMIT who he mentioned the idea to happened to have parents running a "successful brewery in country Victoria". This helped them find a brewer who was happy to work on a recipe for them on the side. I haven't been able to confirm details on either of these, but I have my suspicions. 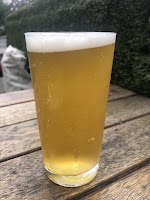 To date there is only one beer available from Noble Boy. It's a Pale Ale & the brief given to the brewer was to get it to sit somewhere between Stone & Wood Pacific Ale & Balter XPA. The beer became the Napier's house beer, for wont of a better term. It's popularity soon saw it expand around Fitzroy & neighboring suburbs before making the transition to cans & national distribution through Dan Murphy's.

With the days ticking down to find one I reverted to the one place I knew always had the beer on tap; the Napier Hotel. The beer meets the brief, but leans closer to the Stone & Wood end. There's a fair bit of wheat in the grist, passionfruit (I assume Galaxy) is the main hop characteristic & it's there but not overpowering. It's a really easy drinking beer, but not particularly exciting.

Remember it's always Beer O'Clock somewhere in the world!
Posted by Noz at 01:10