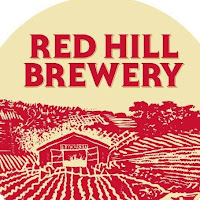 STATS
Red Hill Brewery is one of the bastions of the Victorian craft beer scene. It was founded way back in 2005 by husband & wife team Dave & Karen Golding. At the time it was the first brewery on the Mornington Peninsula. The brewery is best known for their focus on English & Belgian style ales, styles which have fallen out of favour with the wider craft beer drinking community in recent years.

Dave & Karen set up the brewery after quitting their jobs in the city & moving down to the picturesque Mornington Peninsula. It's a wine growing region & although there is a burgeoning craft scene there now, they were the pioneers. Their passion for beer & the styles they brew was born after spending a few years in the UK, travelling all over the country as well as venturing into continental Europe.

After starting a family there was a period of about 2 years where the brewery taproom was closed, except for special events. The couple thought that the proximity of the house to the brewery & the accompanying people constantly coming and going wasn't a great mix with young kids. After managing to move off site in 2014, the brewery taproom reopened albeit with reduced hours. The house the Golding's used to inhabit is now available to rent through the brewery's website.

2018 saw a much talked about rebrand, as well as the introduction to the packaged range of some hop forward beers, previously tap only offerings. In an effort to appeal to the modern craft drinker & play into the beach lifestryle, they made the decision to package the beers in cans. At least anecdotally it's worked; I've seen far more talk about Red Hill in the two years since. The afficiando's have always been Red Hill fans; their Imperial Stout, Temptation (a Belgian Strong Golden), Harvest ESB (wet hopped with their own hops) & Scotch Ale made sure of that!

If my memory serves me correctly, visiting Red Hill is the first time I'd seen hops up close. They're quite a different sight from the rows upon rows of vines around the brewery, nestled in the hilly terrain of the wine region. The brewery itself is housed in an old wooden artists studio. There's limited some seating inside, however there's a wonderful verandah out the back, as well as some nooks & crannies to sit & enjoy the lovely country air. 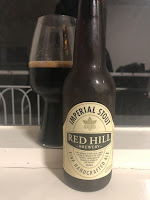 The website says that they're currently rejigging their menu & plan to relaunch with a new menu in Spring, (hopefully) post-COVID. I've enjoyed burgers through full South American BBQ there in the past, all of which has been excellent, so I would expect nothing less when their new menu launches.

Red Hill was a brewery that I couldn't get enough of in my early craft days. It made choosing a beer for this post next to impossible. In the end I couldn't go passed a vintage Imperial Stout (complete with old label for those interested). It's a luscious Imperial Stout, starting off with chocolate & dark fruit before roast and bitterness strike on the backend. It's a beer I make sure I always have in the cellar; one of the true most try beers in Australian crafft beer.

Remember it's always Beer O'Clock somewhere in the world!
Posted by Noz at 23:38