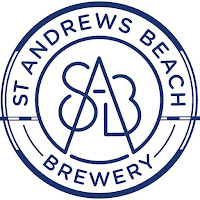 STATS
Fingal is one of the least likely places in Victoria to house an enormous micro brewery & hospitality venue. It's at the far end of the famous Mornington Peninsula wine region. The brewery opened its doors shortly before Christmas in 2017 to huge crowds which haven't left since!

St Andrews Beach Brewery sits on the site of the former Markdel stables. This was a famous horse racing training facility, one of the finest in the world, run by the Freedman family; its most famous alumni is of course triple Melbourne Cup winning mare Makybe Diva. The old racetrack has been converted to an apple & pear orchard, from which they hope to be producing cider in the coming years, as well as some hop bines!

Andrew Purchase is the man behind the brewery - having got the craft beer bug after investing in a French craft brewery, Heads Beach Brewing Company in Seignosse, years earlier. He's joined by Michael Freedman, one of the original owners of the site, Tommy Berry, a famous jockey, David Warner, the cricketer, Jack Dahan & Michael Wallace.

The real reason to visit is the venue! It's immediately obvious why so many investors were needed; it's stunning! You walk through impressive gate into an enormous beer garden. There's wooden tables and bench under matching umbrellas, but the real highlights are the converted old horse stableslining the sides of the beer garden that seat 10-16 people. There's lovely touches like the rust covered metal kangaroos (pictured above) as well as a rhino at the entrance. 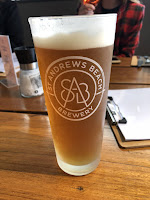 The building at the end of the wide footpath that cuts through the middle of the beer garden is just as worthy of discussion. It's beautifully constructed with huge windows behind the bar showing off the stainless steel. The bar is very modern with polished concrete floors, high wood panelled ceilings & intricate lighting.

Their core range is solid, but leans towards the new craft converts. One of their "Barrier Specials" (limited releases) is the beer I'm going to discuss today. It's a Rye IPA & it's amazing! There's a heap of spicy rye, plenty of citrus from the hops & good bitterness. I was really disappointed to see this beer not make a jump to their core range; there just aren't enough good Rye IPAs out there!

Remember it's always Beer O'Clock somewhere in the world!
Posted by Noz at 06:17