STATS
Valhalla Brewing is a gypsy brewing operation based in Torquay, on the surf coast. Scott Hunt had been homebrewing for 25 years & decided to take the plunge into the commercial side of things after hearing Jamie Roydhouse of Cockies Beer do a talk at the Odyssey Tavern about how he got started in the industry.

Unlike Jamie, Scott decided to go down the gypsy brewing route rather than investing in stainless steel. They were one of the first in Australia to embrace crowdfunding; resulting in 45 people backing their Obsidian Black Ale to the tune of $5,000 in March 2016. With the first beer a resounding success after selling out in 5 weeks the team returned to the crowd funding route to launch their second core range beer Aragon IPA,

Fastforward a couple of years to December 2018, which saw the arrival of the Valhalla Brewing Taproom. Scott & his wife Angela Tydd reprised their idea of 16 years earlier, only interrupted by the arrival of their daughter, by opening a bar! After struggling to find a suitable place in their home town of Torquay, their search turned to Geelong where they found a new build on Union Street, a quiet laneway that wouldn't look out of place in Melbourne.

It's a comfortable space that really knows what it wants to be. The couple describe it as having a “cruisy, retro vibe like walking into someone’s loungeroom in the 70s but without the kitsch”. Music plays a big role in the identity of the taproom, with vinyl nights, metal nights & pictures of artists adorning the skull wallpapered walls. 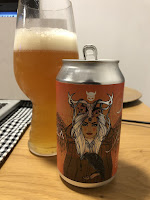 As you walk in there are some brown leather sofas, which really relax you into the space. The bar is on the right hand side towards the back with high backed stools around the bar as well as tables for 6-8 people with the same stools towards the back. There's 8 taps, featuring four of their own beers on the day we visited, alongside other local beers - whilst there is a moderate selection for takeaway.

Despite my love of Black IPAs, I've never tried Obsidian! It's something I'm going to rectify shortly... In the meantime I'm reviewing Freyja Moon; their Passionfruit IPA loaded with Galaxy, Riwaka & Simcoe. As you'd expect it is loaded with passionfruit upfront, as the beer warms a little you get a little malt sweetness coming through. It's a really enjoyable beer!

Remember it's always Beer O'Clock somewhere in the world!
Posted by Noz at 04:07